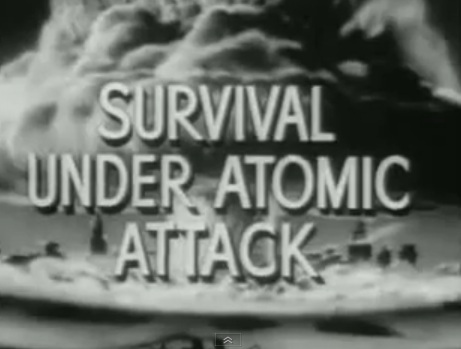 Perhaps the most defining feature of this film is the narration, provided by legendary journalist  and pioneering news anchor Edward R. Murrow.  When Castle Films, the Federal Civil Defense Administration, and Murrow teamed up in 1951 the result was Survival Under Atomic Attack, which brought a popular pamphlet to the screen and initiated the first government sponsored civil defense film campaign.  When the trio collaborated again in 1953, Disaster on Main Street was created.  Murrow, also a keen writer on nuclear developments and Cold War tensions, was hosting two television shows for CBS when he was tapped to participate in this second production.  Consisting mostly of black and white footage from World War II, Disaster on Main Street attempts to link various nations' post-war status to their wartime civil defense preparations. 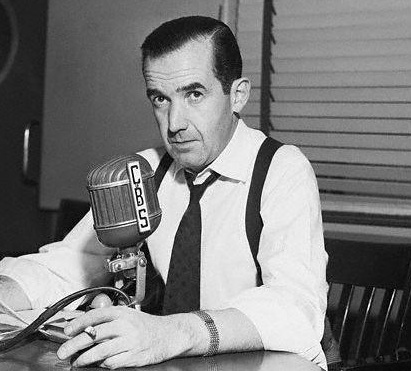 Disaster on Main Street is an excellent example of the early goals of the F.C.D.A., to raise an awareness of the destructive power of the atomic bomb while simultaneously making it appear conventional to reduce the risk of panic and apathy.  Praising the resolve of Americans during previous conflicts, Murrow begins by stressing the changing nature of warfare and noting the importance industry now plays in successful mobilization.  Already famous for his radio broadcasts during the great London Blitzkrieg, Murrow provides an authoritative tone to the stock footage of rubble and debris which make up the bulk of the film.  Germany, Japan, and England, each with differing levels of civil defense preparation, now fare accordingly in the years following the war.  Using these images to reach back into the recent memories of the Second World War, Murrow is able to link the destruction portrayed on screen to the newly developed atomic weapons, ultimately asking if Americans can rise to the task of defending themselves against such devastation.  As if to soften the blow for American audiences at the time of release, the disaster portrayed at the end of the film did not result from bombs or enemy attack, but instead from the deadly Texas City Disaster, an industrial explosion caused by fertilizers.  This tactic allowed the F.C.D.A. to create a vivid awareness of the atom bomb's potential for destruction, while keeping it within a conventional atmosphere.

As a product of the F.C.D.A., Disaster on Main Street was filmed throughout Michigan, including Dearborn and Battle Creek, which was home to the national civil defense headquarters.  The "main street" depicted in the opening scenes of the film appears to be North Main Street in Milford.  In 1962, the town would serve as the setting for another emergency preparedness film titled Milford, USA.  That production, which explains the sudden and devastating effects of natural disasters, also makes a connection to the atomic threat by concluding with the establishment of a fallout shelter.  Later in 1953, Edward R. Murrow would work with CBS and The Air Force to make One Plane, One Bomb to encourage volunteers for plane spotting positions, offering grim predictions if more citizens do not step up to meet the task.  Disaster on Main Street, however, would be declared obsolete by the government a mere four years after its release.  By 1957, public copies of the film were recalled and private owners were encouraged to cease showing it.