Civil defense films were, primarily, a teaching tool.  Films created in anticipation of a wide release among the general public were infused with entertaining elements as well, to grab a viewer's attention while relaying a message of preparedness.  The same cannot be said for the often tedious, purely instructional films meant to train civil defense officials and radiological monitors.  Nuclear Detonations:  The First Sixty Seconds, falls into this latter category, delivering just as the title promises, a summary of the immediate effects of a nuclear explosion.  As if to drive home its strictly educational nature, the film is set entirely within a classroom while the narrator teaches a civil defense workshop. 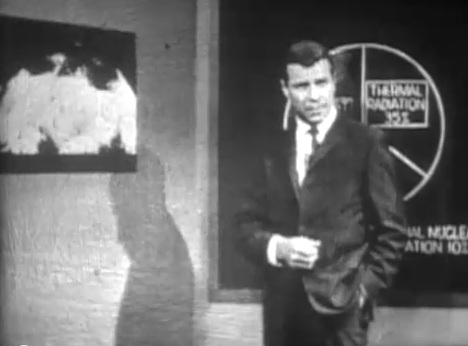 The narrator is portrayed by Chris Bohn, a television actor and veteran of several civil defense productions throughout the 1960's.  He can also be seen hosting In Time of Emergency (1969) and Fallout Shelter: What is It? (1963), portraying a concerned news anchor in Individual and Family Reactions on Warning (1964), wearily examining bomb damage as an engineer in Manual Damage Assessment (1964), and perhaps most interestingly, playing a shelter occupant in Information Programs Within a Public Shelter (1963) who often wanders out of the dark shadows to address the camera and offer management advice.   Here he acts as a teacher, explaining to his class the dangers of blast, heat, and initial radiation which pose the greatest hazards in the period after a nuclear detonation.  Given the short length of the film and the focus of its content, the Office of Civil Defense likely intended it to function as a visual aid or a segue into a longer lecture. 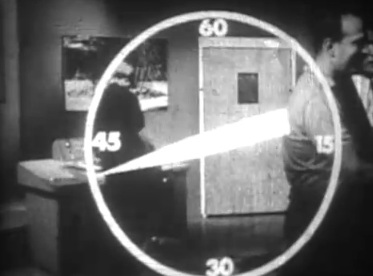 Some interesting artistic elements remain, however, demonstrated in the opening scenes where a ticking clock counts down the seconds until the class begins while students mill about the room.  This animated timepiece, accompanied by a musical score reminiscent of The Twilight Zone, plays into the narrator's opening argument: in the time it takes for his class to settle in their seats, the worst damage from a nuclear bomb would have already occurred.  This point is repeated a number of times through graphic photographs and chalk outlines meticulously drawn upon the blackboard.  Does the danger of a nuclear detonation end after the first sixty seconds?  Certainly not, but as Bohn makes clear in his closing remarks, "that's for another chapter!"