Pattern for Survival opens with a curious scene, a museum guide leading a wheelchair-bound youth through displays of battle-axes, bows, spears, swords and knives.  The purpose of this macabre tour?  To demonstrate how mankind frequently creates frightening weapons of war, including the atomic bomb, which they struggle to understand.  Creating a film to help the American public understand the dangers of an atomic bomb became the goal of New York based Cornell Film Company when it teamed with Factual Films, Inc. to release Pattern for Survival in November of 1950.  Because the production predated the formation of the Federal Civil Defense Agency by one month, it would not be considered an "official" government sponsored civil defense film.  This did not stop Cornell from heavily promoting their new motion picture as "The Film That Shows You How To Stay Alive" and noting its appropriateness for all ages.  Contemporary critics were quick to point out the film would likely terrify young viewers, though most praised the attempt to present lectures, demonstrations and hypothetical atomic attack scenarios all within sixteen minutes.  The result is an often sporadic narrative, which leaps from scene to scene and style to style at a breakneck pace.  This becomes apparent when there is a sudden cut to the office of William Laurence, a journalist for the New York Times and media expert on nuclear developments who would later anchor the ABC evening news.  Introduced with a long list of accomplishments, including two books on the atomic bomb and several Pulitzer prizes, Laurence strikes up a cigarette and admonishes the audience to pay close attention to the film's advice.  "The atomic bomb is the most powerful physical destructive weapon history has ever known!  But it is above all a psychological terror weapon!  Does this mean that we are helpless against an attack?  There is most definitely a defense against the Atomic bomb! Note very carefully what is to follow!"

Another rapid cut introduces Pattern For Survival's narrator, CBS radio reporter Chet Huntley who would later make television fame six years later as the professional counter-point to David Brinkley in the Huntley/Brinkley Report.  Huntley proceeds to switch on a projector to explain the scientific facts of nuclear detonations.  An animated sequence begins with an animated a shaking atom, ready to burst and release fission.  A different narrator takes over at this point and it appears that segments of another film have been spliced in which outline the three dangers produced in an atomic explosion.  Blast, shown removing a chunk of an animated city, fire, igniting the city, and Gamma rays, basking the rubble in a radioactive glow.  Huntley concedes an atomic attack on a city would be a grim scenario.  "At this point, you're going to ask, what chance does that leave us? Is there anything that can be done about it?"  The key to American survival would be deep underground blast shelters, capable of surviving the fire and heat of the bomb.  The film advocates these structures for inner city target areas.  If adequate warning time is given to reach such shelters, many will survive in the most vulnerable regions.  Anticipating the scenario of a surprise attack, the film relates the concept of ducking into a doorway or sturdy alcove.  Accompanying this advice are several amazing animated depictions of proposed blast shelters and men crouched behind cement embankments in the shadow of an atomic flash.

The remainder of the film provides advice on how to survive particular scenarios during an atomic attack.  Upon receiving warning of an incoming enemy bomb, a young mother leads her daughters down to their basement and checks her survival kit.  Two business men evacuate their office, following signs marked SHELTER.  A housewife dives under her bed to avoid shattering glass.  In a particularly dramatic sequence, motorists abandon their cars and pedestrians on a busy street corner stream toward buildings marked as shelters.  This footage would be reused several times in the coming years in other civil defense films.  Seeking immediate shelter, Huntley explains is the best course of action during an "airburst".  A more devastating possibility is a "waterburst" or an underwater detonation of an atomic device.  Early civil defense advice held that radiation was only dangerous when falling from sky in fallout-laced rain.  A longshoreman watches a water burst mushroom cloud fly into the air before stumbling indoors, narrowly missing the water raining over his work zone.  As the music grows somber, he shakes his head slowly in disbelief, backing away from the deadly meteorological situation and heeding Huntley's advice to stay inside. 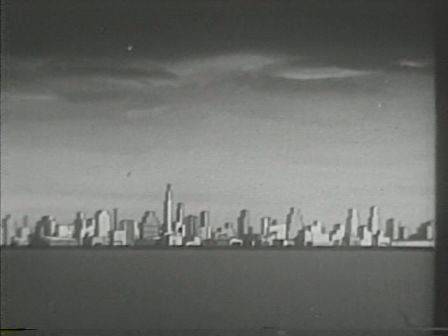 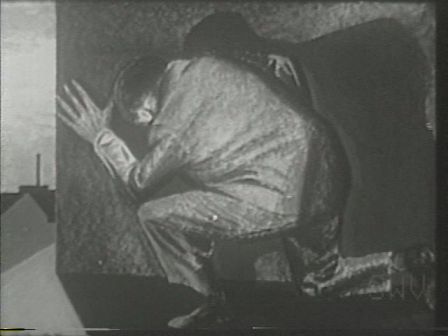 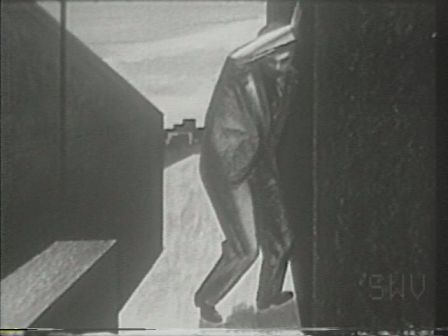 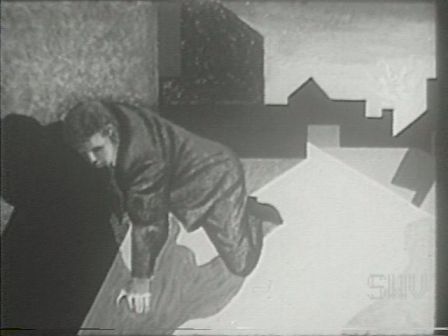 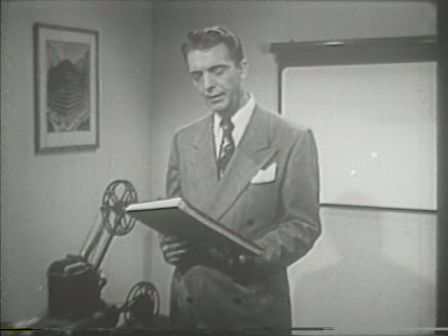 "At this point, you're going to ask, what chance does that leave us? Is there anything that can be done about it?"  A somber Huntley stops his projector, undercutting the optimistic mood of the spliced film segment.  He deceives with his melancholy attitude, however, suddenly adding on with a smile "yes, definitely, we've simplified it for you all the way!"  Deep underground blast shelters, capable of surviving the fire and heat of the blast are the key to survival.  The film advocates these structures for inner city target areas.  If adequate warning time is given to reach the shelters, many will survive in this most vulnerable region.  Anticipating the scenario of a surprise attack, the film relates the concept of ducking into a doorway or sturdy alcove.  Accompanying this advice are several amazing animated depictions of proposed blast shelters and men crouched behind cement embankments in the shadow of an atomic flash. 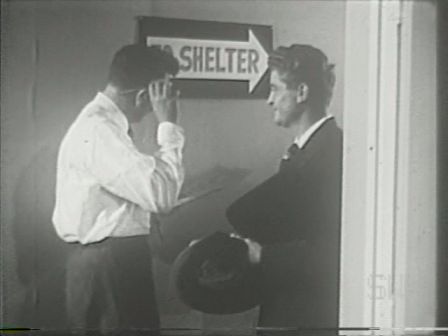 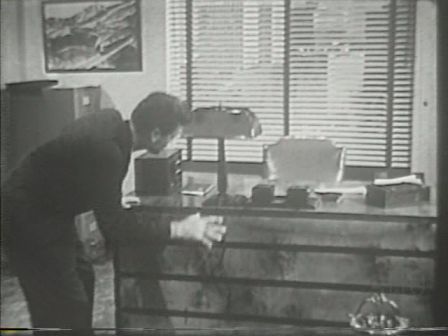 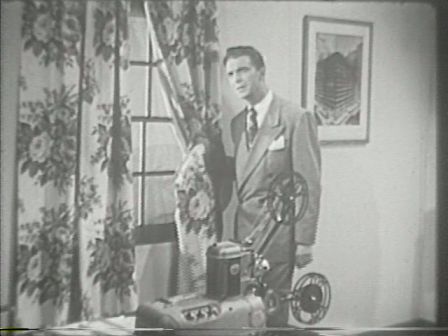 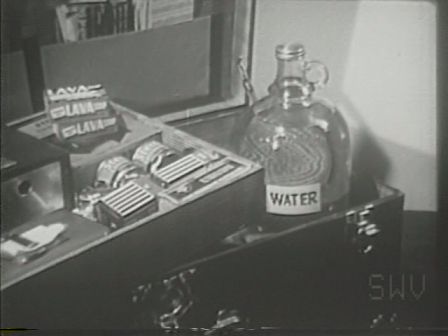 "Those of us that work in an office setting or stores, must familiarize ourselves with the exact locations of the nearest shelters!" The film cuts to an office tower where the hallway is adorned with a bold sign marking SHELTER.   A businessman walks about his office and examines his thick oak desk in relation to the large picture window behind him.  Determining it to be satisfactory, Huntley returns to the screen again to emphasize the danger of flying glass, labeling it, "the most dangerous thing in your home!".  In the home as well as the office, a comprehensive survival kit should be kept handy at all time.  Suggested supplies include: Lava soap, bottled water, raisins, chocolate, canned goods, campsite table, cookware, and a first aid with sunburn cream along with a Red Cross manual, a pamphlet on atomic warfare, and several local maps.  Putting all of this information together, Pattern for Survival offers two hypothetical attack scenarios, depicting the quick action which would be needed following receipt of a warning.  As the clip below displays, Huntley first explains what to do with sufficient warning followed by instructions for a surprise burst.

Concluding the film, Huntley warns of another mode of attack, one more devastating then even a surprise air-burst.  He speaks of the water-burst, an underwater detonation of atomic devices in port cities and coastal territories.  Similar to the final segments of You Can Beat The A Bomb, the belief held that an explosion underwater would bring fallout laced rain pouring down upon major cities.  To drive home the fear of this scenario, a longshoreman watches a water burst mushroom cloud fly into the air before stumbling indoors, narrowly missing the water raining over his work zone.  As the music grows somber, he shakes his head slowly in disbelief, backing away from the deadly meteorological situation and heeding Huntley's advice to stay inside. 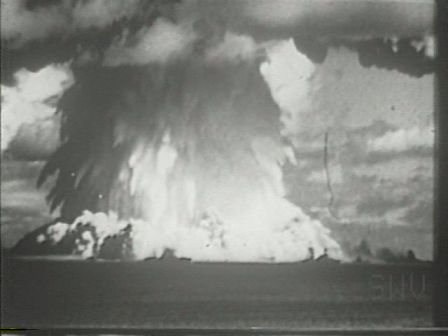 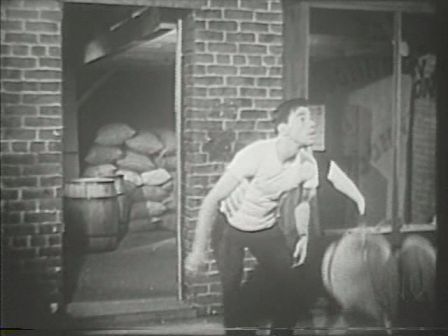 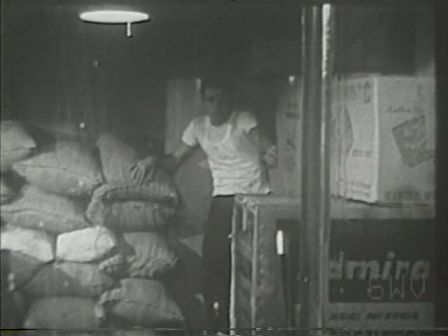 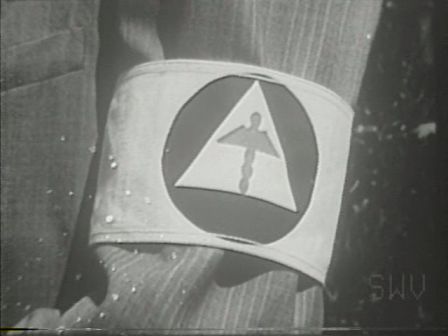 "Well there you have it, the bomb will have struck.  Some of us will have perished...  But most of us, those who will have taken the necessary precautions, will be safe, although there will be much left to do.  Because such an explosion will have left some areas dangerously radioactive.  Much can be done, but most will fall in the hands of Civilian Defense Groups, disaster squads, and Red Cross Units!  They will be there to help you, they will instruct you to bury contaminated clothing, not to burn it, since smoke is a carrier of radioactive particles.  They will show you how your coarse, grease cutting soap will either remove or reduce radioactivity from your body.  They will tell you to listen to your radio attentively for important instructions, and they will help those who will not be in a condition to help themselves.  Theirs will indeed be a noble duty!  Meanwhile your duty will be to support these groups and to help organize them if need be.  In so doing, you will not be doing something and getting nothing in return, you will be giving to protect yourself, your home, and your country!"